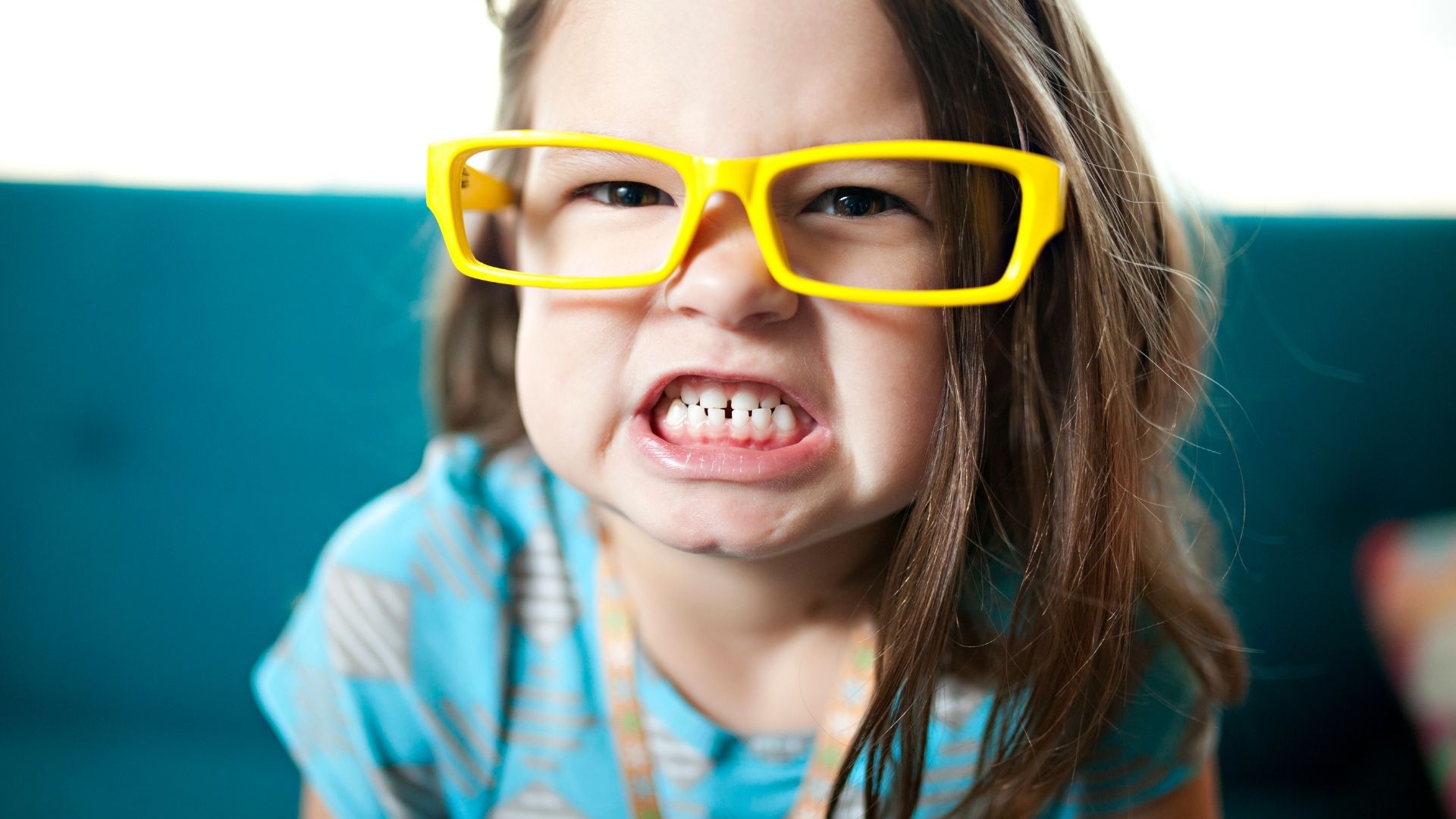 Why your child should say “I’m angry”

This is part 2 of a 3-part series on emotions. To watch part 1, please click the following link: What You Need to Know about Your Kids’ Thoughts, Emotions, and Behaviors (spoiler – they’re all connected!)

You probably hate it when your child loses it when they get upset! But do you know what’s going on in their brain when they have that reaction? In this episode, I explain the results from a study that reveals when a child says, “I’m angry,” it decreases the emotional over-reaction. This is how kids can learn self control.

This is the second in a three part series on emotions. As I’ve mentioned before, I have been reading through the Special Edition of TIME called The Science of Emotions. Basically an entire magazine filled with scientific data, research, and studies that have explored human emotion – really kind of across the board. What that means in the workplace, in your family, how it effects how you cry, I mean everything you could possibly think of about emotions. And it’s been so exciting for me to see data that supports what I already know and what I already do and what play therapy teaches.

So, as I promised in the last part of the series, I wanted to dive a little bit deeper into the emotional vocabulary idea. But this is going to have a new spin because another study that was conducted… I know in the last part of the series I referenced a Yale study. In this study, they looked at what happens when you get angry. And because I work with hundreds of parents and I hear lots and lots of stories about their interactions with their children and behaviors of their kids, anger is a pretty prominent concern when it comes to child behavior. Parents will often complain about that the most. They want that fixed the most. Obviously, if a child is dysregulated and gets angry, or aggressive, or violent, or erupts, or has tantrums, or any of those emotional expressions of anger and frustration, those are usually the ones that are really hard to deal with. So this study talked through the neurobiology of anger, and I promise I won’t get too deep, I promise I won’t bore you. But I want to hit some highlights of this study because this is so impactful and relevant for understanding what’s going on with our kids. And then I’ll tie it into the emotional vocabulary.

So here’s what goes on when you get angry. This is not just exclusive to children. We as humans, when we feel anger, it lights up the amygdala, which is a little spot in the brain. It’s actually part of the very primal limbic system, which essentially means limbic system controls impulses. That’s your impulse center, if you will. So amygdala lights up when you feel anger, which is part of your limbic system, which is responsible for impulse control. So if you are with me so far, what’s really interesting is that amygdala involvement releases cortisol. And I think you’ve probably heard that that’s a pretty normal hormone that you hear and that is your stress hormone.

So you get angry. It lights up this particular part of the brain. It tells your body you need cortisol to deal with this stress. So right off the bat – and there’s more to come – but right off the bat, we’re seeing what happens when we and our kids get angry. They’re automatically dealing with a flood of cortisol because their brain is telling their bodies, “You are in a moment of stress. You need a better way to deal with this. So here’s some cortisol to get you through it.”

That’s very interesting, because that explains a lot of what we see in the way children react. So with that understanding, the cortisol then triggers fight or flight. Again, a pretty standard phrase that you will hear even outside of the psychology realm. Fight or flight, the very instinctual awareness of ‘I either need to get ready to fight this issue or I need to run away from this issue.’ And I will often say, you know, way back in caveman age, you run into a tiger, and you either have to be prepared to fight for your life or try to run away. So it’s a very primal, innate thing that our body does to safeguard us. That’s the chain reaction, neurobiology that’s going on in our brain. Amydala – limbic system, cortisol – stress hormone, fight or flight.

Okay, so if we understand that we, as adults, are going through that, we also have rational thought, we actually can use our cognitive side to address what’s going on. Kids are almost exclusively emotional, so all this is going on for them, and they are governed 100% by how they feel. So they feel all of this going on inside. What is their go-to reaction? The emotions, the meltdowns, the over expression, behavior. Everything comes out, it’s an outpouring of everything is going on inside. So here’s what’s the best part of this. That’s kind of what you have to go through to get to the good stuff. Here’s the good stuff: they found in this study that when a person can shift to saying one phrase… all this is going on, they are angry, all of this we’ve talked about has already taken place. If they can take a moment and shift to saying the words, “I’m angry,” it takes them out of the amygdala, takes them out of the limbic system. It moves them into the prefrontal cortex.

Now again, more neurobiology. All you need to know is the pre frontal cortex is the rational part of your brain. It’s the part of the brain that lets you think about how you’re going to handle the situation. So if a child can get to a point where they recognize their feeling and then say the words, “I’m angry,” the rational side of their brain kicks in. It takes them out of the impulsive side of their brain. Prefrontal cortex is now involved where it can say, ‘this is the way you should handle that.’ This is what we do in play therapy. This is what kids learn in play therapy. They learn how to accurately identify their feeling and then effectively communicate their feelings. That’s the emotional vocabulary. It’s so simple. It’s what we’ve been doing for decades in play therapy. And studies with adults, in a completely separate context, are now proving what we as play therapists already know.

If a child can identify their feeling and communicate it out loud, it changes everything. This is true for adults too. How many of you know someone that gets angry and punches their fist through a wall? They never moved out of their limbic system. They had no impulse control. The impulse was, ‘I’m mad. I want to hit something.’ They punched their fist through a wall. Never once did they say ‘I’m angry,’ which would have shifted them into the rational side of their brain, which would have said, ‘Even though you’d like to punch your fist through a wall, there’s probably a more effective way to solve this problem.’ So there are plenty of adults that have never gotten this.

So what does that mean for you? How do you use this with your kids? Reflect their feelings? I know I’m a broken record, but it’s so crucial. So how do you do that?

“You are angry.” You + feeling word. “You’re upset.” “You’re frustrated.” “You’re annoyed. ” “You are disappointed.” “You feel betrayed.” You + (fill in the blank) – whatever it is that they are feeling in that moment. Look into their eyes, pay attention and come up with an emotion that you think they’re feeling. Here’s why it’s so powerful. They feel all of this going on. They have this cortisol reaction. They have the amygdala lit up. They have their adrenaline. They have all of the somatic things going on inside of their bodies. They don’t know what any of it means, but they feel it. They sense it. So if you say “You’re really upset,” (kids) have all this sensation going on. Okay. So now I can identify, ‘When I feel this way, I’m likely feeling upset.’

There’s the identification of the feeling. Then next time they’re in the same scenario -different environment, I’m sure – but they’re feeling this way. ‘Oh, that’s right. Last time someone told me I was upset when I felt this way.’ Now they are equipped with an emotional vocabulary to say to someone, “I’m upset right now.” In and of itself, that is an emotional vocabulary that will carry them well, far into their adult years. However, when they also are able to shift into their prefrontal cortex, they’re able to use rational thinking and their brain to help them manage the situation, which is impulse control.

Which, of course, we want both. We want our kids to be able to control their impulses, and we want our kids to be able to have an emotional vocabulary that equips them to communicate what they’re feeling. So fascinating, this study coming out. I’m so excited that it just further encourages what I do, what I train, what parents have learned from me. Use reflecting feelings so that you can help your kids build an emotional vocabulary. The results really are lifelong, and it sets them up for such greater emotional and relational success in life. Thanks so much. I’ll talk to you again soon. Bye.