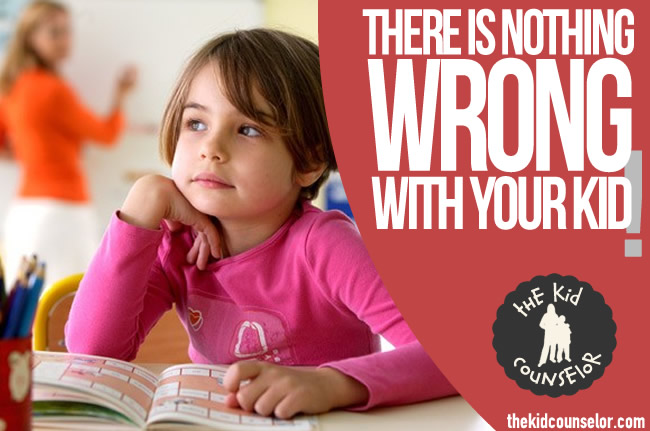 There is Nothing WRONG with Your Kid

I received an email this week from Dr. Jon Cowan about achievement and attention in kids. Although he was promoting his program and marketing his system, several sections of his email caught my attention.

While it can be easy to assume that there is something biologically wrong with a child that does not succeed in school, does not focus, or does not keep attention on given tasks, acts out or has excessive energy, there is research and evidence to suggest that it is more likely environmental or conditioned than biological.

So, with that in mind, when I read Dr. Cowan’s article, this stood out to me immediately: The BBC uses the quote, “The addictive nature of web browsing can leave you with an attention span of nine seconds – the same as a goldfish.”  He goes on to talk about life before electronic devices were in the hands of every child, pushing buttons and navigating the internet, apps, video games and more. He acknowledges that our “addictions” in the past were reading books, doing puzzles, drawing; all of which gave us much longer attention spans because they required focus and time.

As kids become more and more accustomed to internet, video games, and tablets/phones that are constantly changing images, they are becoming programmed to switch focus and attention quickly. This contradicts academic training and expectations that encourage time and rehearsal to fully master something.

Rather than jumping to the conclusion that a child with these characteristics or behaviors should be tested for ADHD, it is important to consider the influences. In fact, another quote that was extremely poignant was this: “In fact, we agree with the deathbed confession of Dr. Leon Eisenberg, the inventor of the diagnosis of ADHD, that it is really a man-made disease, a fiction created largely for the benefit of drug companies and physicians.”

Interesting! The creator of the diagnosis later recants the disease as non-existent. (A little disclaimer here – I am fully aware that there are children who legitimately have biological and chemical imbalances and have benefited from not only a diagnosis of ADHD but also the medication that was prescribed). However, in the vast majority of cases, children do not need to be diagnosed with anything.

Let me give you a story about this very thing. When I ran my practice, I offered a parent consultation prior to beginning therapy with children. I cannot tell you the number of parents who came into my office and immediately disclosed that their child had already been diagnosed with ADHD by whomever, or that they felt that the child needed to be tested for it. As a play therapist, I believe in the power of a child’s ability to work on issues, heal and change for the better if given time, tools and opportunity. So, my standard response became: “I do not need to know about previous diagnoses, and do not immediately test for them either. I will address social, emotional and behavioral elements in play therapy, and if you still believe at the end of treatment that the diagnosis is relevant or desired, we can address it then.”

I said that so many times, I cannot even begin to give you a number. Not surprisingly, I NEVER had a parent mention the diagnosis again after play therapy interventions. Play therapy is based in simple, creative, imaginative play with toys that are basic and traditional. When kids are allowed to take a break from technology and given the chance to explore their desires, dreams, fears, interests and experiences through play, they begin to naturally ground themselves. They learn to listen to their bodies, they understand expectations of themselves and others, they grasp a sense of themselves in the bigger world around them, the self-regulate. This is what helps create calm, focused, attentive kids.

There are many kids who struggled last year in school, whether academically, socially, or emotionally. For those children, the summer can really be a valuable break to instill some skills and build confidence before the new school year begins. The last segment that resonated with me was: “If you are concerned about children doing well in school this year, and last year was “a bit rough”, its time to act in order to give them a headstart in building their ability to pay attention, and to enhance their self-confidence so they can “hit the ground running” for the new school year.”

Play therapy techniques that are especially helpful for kids who need a little extra encouragement for the upcoming academic year include:

1. Encouragement. Kids who believe in themselves and have confidence in their ability to tackle anything typically succeed in school.

2. Reflecting Feelings. When kids act out or do not meet expectations, it is often because they believe they are not being heard or understood.

3. Setting Limits. Kids need and want clear and defined limits, and actually thrive when they know what to expect and what consequences there are for breaking the limits.

One of the Rules of Thumb that I teach when I conduct the Filial Therapy sessions is, “Focus on the donut, not the hole.” (Landreth & Bratton, 2006). The idea is that it is easy to get wrapped up in what is missing, what you wish were different, what you feel is lacking in your child. All the while, you are missing the significance of what is there, what is positive and what can be cultivated.

A child who is out of control at times, who doesn’t complete tasks, or who struggles to pay attention in school is likely just a child who has not practiced self-control, completion, and focused attention. Those are skills that need to be taught, modeled, and learned. Kids need to be told they can do those things, and need to believe that they are capable. Summer is a great time to instill those values, experiences and beliefs, so that this coming school year is a success!