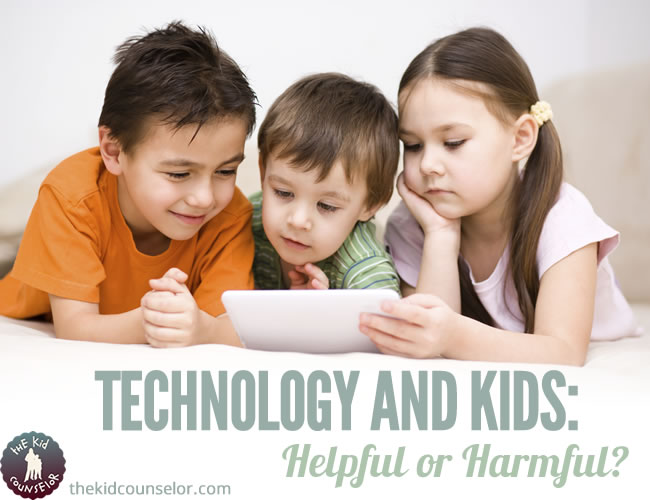 Technology and Kids: Helpful or Harmful?

In the last decade, our society has become even more reliant on electronics and technology than ever before in history. We have phones, ipads, laptops, computers, video games, and televisions that have been integrated into every day life. As a result, kids are becoming more savvy and competent on devices, and they are using them with much greater frequency. But to what outcome?

There are those who oppose the use of technology with kids, and stand firm in their position that there are documented reasons for preventing children from exposure to technology until they are teenagers. In fact, a recent article: 10 Reasons Why Handheld Devices Should Be Banned for Children Under the Age of 12 cited ten reasons why handheld devices should be banned under the age of twelve. Here is a brief overview:

1. Brain development – Stimulation in the developing brain of children from technology has been connected with attention deficits, cognitive and learning delays, and impulsive and unregulated behaviors.

3. Obesity – Thirty-three percent of American children are obese, and children who have devices in their bedrooms are 30% more likely to be obese.

4. Sleep deprivation – 75% of kids have technology in their rooms, and a study found that 75% of 9 and 10 year olds were sleep deprived significantly enough that it negatively affected their grades.

5. Mental illness – Technology has been linked to and implicated in the increase in diagnoses of mental health disorders in children, including depression, anxiety, attention deficit, and problematic behavior, among others.

6. Aggression – Aggressive and violent games and shows have been connected to aggression in children, to the extent that media violence has been labeled a public health risk due to its detrimental effects on kids.

7. Decreased concentration – High speed media content and information requires the brain to reroute neurons to the frontal cortex, which decreases the ability to concentrate and remember.

8. Addiction – Children who are not healthily attached to parents are more likely to attach to devices and become addicted, with a recent study finding that 9% of children 8-18 are addicted to technology.

9. Radiation – While the topic is still being investigated, there are many organizations and agencies who caution against children’s exposure to radiation emission from wireless devices, stating that their brains and immune systems are not fully developed and are more susceptible to damage.

Interestingly, however, is that there is evidence indicating that there are positive benefits from technology use in children as well. A variety of studies found six reported beneficial outcomes for children playing video games, including:

3. Reduction of stress and depression

So, how do we make sense of conflicting information and data? How does a play therapy perspective address these concerns? Above all, parents are responsible for limiting exposure to anything that is done in excess. Children can eat too much, sleep too much, watch TV too much, text too much, play video games too much. We must set boundaries and rules and follow through with consequences for choosing to break the limit.

Further, play therapy is rooted in focusing on the relationship between the parent and child. If your child really loves video games or technology, it doesn’t have to become a point of contention. Incorporate technology into one on one time to invest in their interests, while still monitoring and limiting amounts. I had several clients to whom I was only able to connect with technology.

Technology makes our world more connected, but in some ways further apart than ever before. We need to encourage children to play with toys that don’t need to be charged, and to spend time with them investing in the relationship. However, watching an hour of TV together for a funny show or twenty minutes of battling it out in tennis on the Wii serves the purpose of building better bonds and communication that play therapy encourages, too. Find a balance: of time with your kids, time with technology, time with limits set. Moderation and purposeful parenting will serve us well in this area!