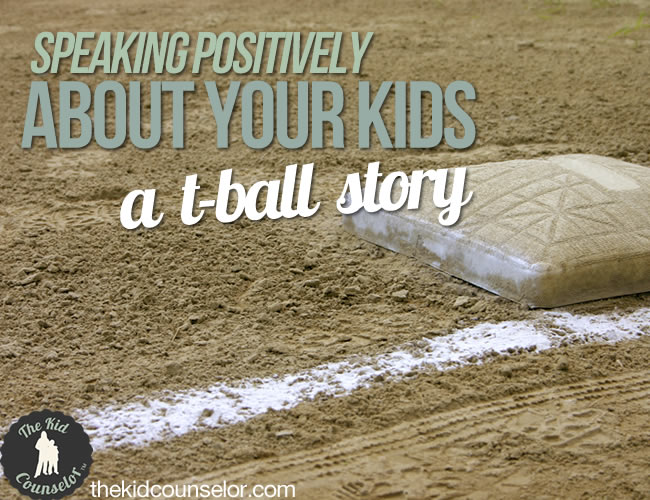 Speaking Positively About Your Kids: A T-Ball Story

I don’t know if this holds true for you as well, but I am learning that little league opens up all kinds of insights about parents and kids. Our son started in T-Ball this year and it has been very interesting to observe the dynamics on the field, on the bench, in conversations, and so on. We all hear the stories of crazy and competitive parents, stressed and burdened kids, and overbearing coaches. But, thankfully, that has not been our experience.

One thing that I did observe, however, is how easy it is to say things about our children to others, often when they can hear us. Parents talk while the game goes on, and it is often overheard by our kids. Of course, that doesn’t mean that what was said was negative or critical. But, one conversation that my husband had with another dad made me stop and think about what his son took away from what he heard both dads say about him.

Words can speak into a child’s heart and shape self-esteem for the better or worse.

In the 3-5 year old T-Ball group, parents are expected to participate and help during the practices and games. Basically, that means standing beside a base and telling the kids when to run and where to go when the ball is hit. My husband and I were on second and third, and some of the other parents would walk beside their child to each base.

One boy who was particularly prone to get distracted and not really pay attention to the game was on second with me and ready to run to third on the next hit. His dad was also following him to each base. When I told him to run to third, my husband was there waiting for him. When the boy reached the base (really a rubber, white square laid on the grass), he reached down and straightened it as it shifted when he stepped on it.

My husband, trained in play therapy principles by proxy because he is married to me :), recognized an opportunity to use the encouragement skill. Encouragement, in the play therapy language, is acknowledging the effort or intention behind a child’s actions. This skill builds their self-confidence, validates their capabilities, and can be given regardless of outcome. So, my husband said, “You made sure that was straight!”

Without giving you more of a background in Encouragement, it may be difficult to see what benefit a statement like that yields, so read more about it by clicking the following links: Encouragement vs Praise and A Praise vs Encouragement Lesson from my Driveway. But, I know that you will be able to see the difference between the Encouragement statement and what his dad responded. After my husband made his statement, the boy’s dad said, “Yeah, he is really OCD about stuff like that.”

An innocent statement can forever brand a label into a child’s spirit.

Now, I acknowledge that his son probably doesn’t know what OCD is or stands for. I also realize that his dad didn’t mean it to be hurtful. But, I was made aware of the power of our words, and the impact of consciously choosing to phrase things positively about our children. Straightening the base was tied to lots of positive things: helpfulness, awareness, conscientiousness, a like of structure, symmetry, or organization. There were lots of ENCOURAGING things to point out. But, the boy heard his dad say something with a negative connotation.

We all say things that we wish we could erase and rephrase. I am not faulting the dad for an innocent comment. I was just reminded that I always want to choose to find the positive, the good, the encouraging, and the helpful in whatever my son does or says. Encouragement is the play therapy skill that helps me to do that, and I am thankful for that tool in my toolbox that I can use in situations like a simple T-Ball game!