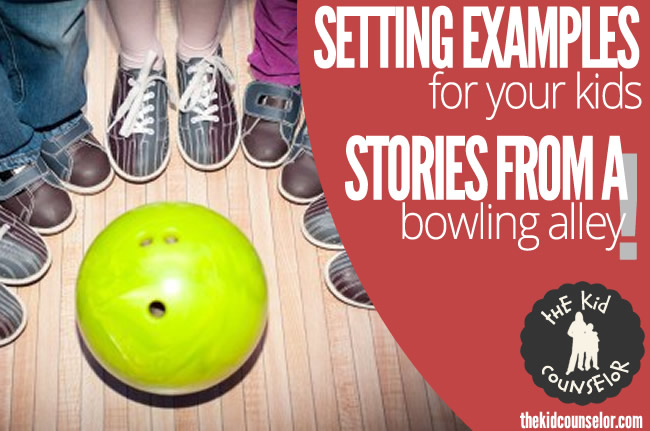 Setting Examples for Your Kids: More From the Bowling Alley

In an earlier article that was very popular among my readers, I wrote about my observations from a bowling alley after spending so much time there with my son. We, as a family, have since joined a weekly league mixed with adults and children. It has been so exciting to watch him get better and make friends with other kids. We even have our own bowling balls now, which makes me feel very official!We bowl a different team each week, and compete against our own scores and the other teams throughout the league. Due to this structure, we share lanes with a different set of parents and their kids every Sunday. We are five weeks in, and I have made some observations that I think are noteworthy.

First, and I talk about this all of the time, kids are like sponges. They model behavior that they see, they absorb energy and emotions from people, and they learn an understanding of the world based on observation of others. You may think that your reaction or response to something is meaningless or missed on your child, but think again. The way that you handle success, failure, frustration and excitement is a lesson for them in emotional control and regulation.

There is a mom on the league who every time she doesn’t get a strike or spare, cusses and makes angry faces, shakes her head and complains to her husband. This may just be the way that she handles losing (or doesn’t handle it), but the unfortunate part is that her five year old son witnesses this.

Every time he bowls and doesn’t do as well as he would like, he gets mad, cries, and yells, too. To make the situation even more distressing, his mom gets angry at him for getting upset. She actually growled to him, “Just bowl! It is just for fun! Have fun!” Ironically, he is merely modeling her example.

Another family has six and ten year old year old boys, and the dad is a very accomplished bowler. He clearly takes bowling very seriously and does not settle for less than high pinfall. (I learned all kinds of new bowling lingo through this!) He is very quiet about his mistakes and doesn’t get angry, but it is very clear that he has high expectations for himself and his scores.

When his youngest son gets up to bowl, he coaches him about how to release the ball and what to do to score higher. He told me that he worked with his son a lot on release and technique before the league. This expectation and pressure is evident in his son’s response when he throws a gutterball. He turns around with panic on his face, apologizes and won’t make eye contact with his dad. His mom is usually the one to reassure him and tell him that it is okay if he misses the pins. He has learned by watching dad score so highly that the bar is high for him as well.

A third family has a seven year old girl. This family has a father and grandfather who are great bowlers (one got a 284 tonight!) and have been in leadership for the local bowling circuit in the past. Interestingly, they do not really react one way or the other regardless of what they throw. They get strikes and spares, and then leave an open frame, and their response is pretty even.

When this girl bowls, she almost always throws the ball straight for most of the lane, and then the ball hooks at the last minute right into the end of the gutter. This happens over and over and they don’t say anything about it to her. When she gets a ball that makes it to the pins, they are very vocal about her throwing a “good ball!” and they cheer her success. When she mentions her frustration about her ball curving, only then do they give her advice about what to do differently.

She is one of the happiest kids on the lanes, and I can’t help but acknowledge the role that adults example plays in kids’ lives. She sees bowling as something that you do for fun, and the more you practice, the better you get. Her family is full of great bowlers, but they do it because they love it. If they have a good night or a bad night, it doesn’t matter. Her attitude reflects an understanding of the world, based in healthy competition.

It is so important to recognize the influence that our actions and attitudes have in shaping our kids’ perceptions, behaviors and emotions. When we choose to remain in control of our emotions even when we are frustrated, express that performance is not more important than effort, and remind them that trying their best and having fun is more important than winning, we teach our kids to handle frustration, losing, and winning in stride. And, after all, our job is to prepare them to face any circumstance with appropriate emotions, actions and words, and they learn how to do just that from watching us!