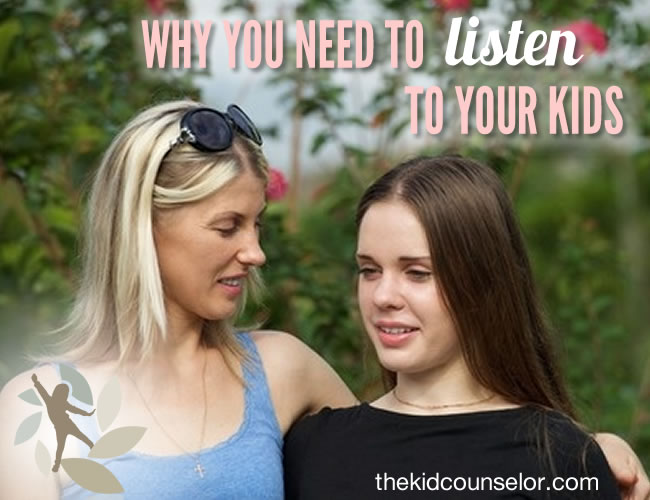 Why You Need to Listen to Your Kids

I have been working with more and more teens at my practice, which is interesting for several reasons. First, there has been a major shift in what parents report as concerns regarding their teens. What was prominent several years ago (moodiness, anger, rebellion) has become self-harming, withdrawal, and suicidal thoughts and attempts. Second, teens are much more aware of mental health in general than they used to be and they are very knowledgable about diagnoses, medication, and therapy. Finally, current teens have embraced the process of therapy much more quickly and readily than teens a decade ago, likely due to the lessened stigma and taboo of mental health issues and treatment.

Not only do I see teens at my private practice, but I also teach at the University of South Florida in Tampa. My students are master’s level interns, working directly with clients in the community at agencies and organizations that treat mental health issues and concerns.

Several of my students work with adolescents and teenagers at their sites. Many of these teens have been admitted to facilities against their will because they are deemed to be a danger to themselves or others. The majority have attempted suicide. Most are clinically depressed. Cutting is common and consistent. Medications and diagnoses are prominent. They genuinely have very little hope and many do not see a reason to live.

My students are required to audio record their sessions so that I can provide them with feedback, so I have been able to listen to their stories and explanations of their current state. Interestingly, most tell a similar story. And most share the same wishes and desires. This is true of my students’ clients in desperate situations, as well as my clients in more stable ones: They want to be heard.

One of the commonalities among these teens who are struggling is that their parents often have been dealing with a lot of their own issues. Obviously, when parents are going through difficulties, it is hard to focus on kids. However, the more kids feel that they are understood, heard, cared for, cared about, and validated, the more likely they are to be well-adjusted and happy teenagers. So the younger and sooner you begin, the easier it will be as they get older and things get more complicated.

No matter the age, it is important to communicate to them that your kids matter. What they think is important. What they feel is significant. Their experiences are interesting. Here are three play-therapy based skills to validate them:

You would not believe the comments I hear when teens are asked to describe their perfect day. Their answer almost always consists of someone caring about their day. Asking about what happened. Wanting to know about their experiences. Needing to be heard.

The good news is that it doesn’t take much to make children feel validated – you just need to make sure that they know that you care. And with these three skills, you can communicate to your kids at any age that their conversations, behaviors, and emotions matter to you. Because kids who think that no one cares become desperate teens without hope – until, of course, someone shows them that they are worth listening to.