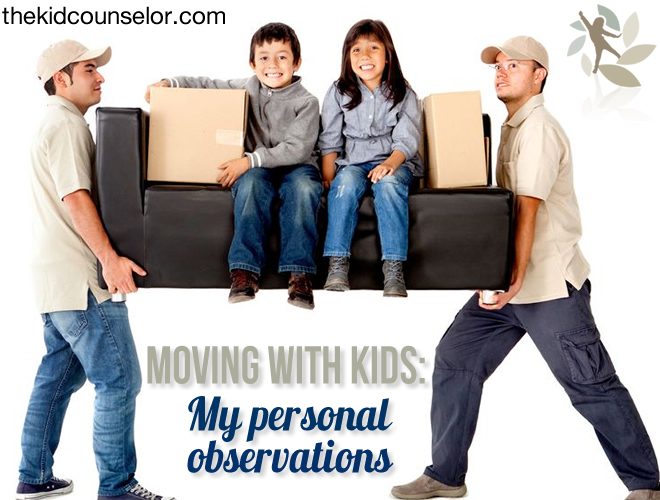 Moving with Kids – My Personal Observations

Summer is in full swing and I always look forward to my son being home for three months. I love having all day with him so that we can enjoy a more relaxed schedule. However, we haven’t had the luxury of lounging by the pool and going to the beach with friends. Instead, we have been packing, loading U-Hauls, and garage selling every spare moment! We officially moved a few weeks ago, but the transition is far from over for our son.

I know how stressed and overwhelmed my husband and I were feeling in the middle of all of the changes. It was interesting that although I talked with my son about the move and what to expect, I didn’t really fully process how he might be feeling about all of this until after the fact. Here are some of the observations and insights that I feel are helpful to share as a result of our experience!

I realized that although my husband and I were consumed with the logistics of moving, the boxes, the unpacking, the furniture, the neighborhood rules, etc., our six year old wasn’t processing anything about the move other than he doesn’t have his best friend next door anymore. He doesn’t have his old basketball hoop, either. He doesn’t know how to get to the pool on his bike without help anymore. Everything that he understood as “normal” in his world was gone. And with the disappearance of his “normal,” comes grief over the losses.

I was certainly feeling conflicting emotions throughout this process – especially when I saw the for sale sign in our yard for the first time. I spent time processing that we brought our son home from the hospital to that house and that is where he took his first bite of food, his first steps, spoke his first word. As much as it is exciting to move into a new house, it is bittersweet as you close a chapter on the old memories. For my son, he began to process that he was sad about leaving his friends in the old neighborhood. But he was happy to move into a two-story house. He wished that we still lived by his favorite restaurant. But he loved that our new neighborhood has a baseball field in it. It is difficult for kids to make sense of emotions in general, but especially when there are two different perceptions simultaneously.

Fear of the Unknown

Part of the challenge about moving for kids is the fear of the unknown. What will the new neighborhood be like? Will they make new friends? Will there be fun things to do? What kind of kids live there? All of the insecurities that are laid to rest in a routine emerge with a vengeance. I suppose adults go through the same thing. I worry that he won’t have any kids his age to play with. That they won’t have the same values or morals that we do. That he will feel lonely. That he will wish we never left our old neighborhood. And over time, all of these concerns resolve themselves, but it doesn’t make them any easier to face in the moment.

So, acknowledging and realizing all of these things going on in my son’s life means a lot of things for a play therapy mom! First, I have been very aware of his behavioral and emotional changes. He was a little mouthy the first week. A little argumentative the second week. A little quick to react with excessive emotion since the move. Instead of getting frustrated or disciplining, I have tried to explain that I know how he feels. (I actually got down on my knees and told him I know how hard everything has been for him in the last few weeks the last time he lost his temper with me; he started crying when I reflected his feeling.) I am trying desperately to figure out how to introduce him to friends so that he feels “at home.” I am getting him a new basketball hoop so that he can play again. And I am realizing that even though he is a trooper and an easy going kid, I can’t take that for granted when his entire life has been turned upside down.

He doesn’t have the things that he is used to right now. And my heart longs to give that back to him, as much as I can in a new city and new neighborhood. Unfortunately, in the craziness of plumbers and appliance people and deliveries, he has sometimes been lost in the shuffle. And I feel like I am struggling to get back into a routine that he feels comfortable in. As a child therapist and a mom, that bothers me!

On the other hand, I know that as much as I want to, I can’t shield him from change and transition. He will learn to be resilient and create solutions out of struggles. But I also know that being aware of his needs and wants, and trying to maintain some semblance of consistency between the old and the new, will help him to adjust well and feel comfortable in his new house. Because I want this new house to feel like a home to him – as soon as possible!