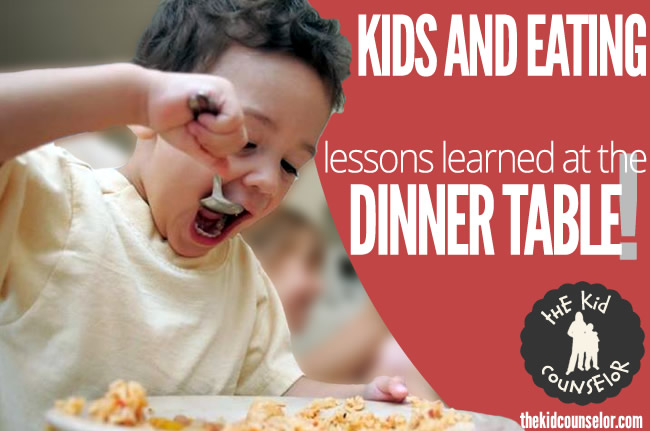 Kids and Eating: A Lesson Learned at the Dinner Table

One of the things that I love about being a parent is that I discover ways to be more effective and to help my son succeed; sometimes through trial an error and sometimes through insight. In this case, I think it was a little bit of both.

My son is a BIG eater. He always has been. He nursed every hour and a half until he was six months old. Then once he realized there was “real” food, he couldn’t get enough. I know that many parents struggle with their kids not eating enough or being picky eaters. That is not our story, but it doesn’t mean that we don’t face eating challenges.

In our case, our son eats so much food so painfully slowly that my husband and I end up waiting on him at every meal. We are completely done with our food, and our son is not yet half way done with his. Our server ALWAYS asks us if we need a box for his food, since we are already finished. My husband ALWAYS jokes that I spend three hours of my day every day watching our son eat. Our friends ALWAYS laugh about having to wait for him to finish his meals when they eat with us. In an effort to help him eat more quickly, we have tried all kinds of things at different stages.

The most recent attempt after he turned four was to give him 30 minutes to eat each meal. Not only does this help him to consistently take bites and not get distracted while eating, but it helps him to get a basic understanding of time management. If he finishes in time, he gets to have special play time after the meal in the time he normally would have still been eating.

The idea was great, but we found that he would ignore the timer for the first 20 minutes. Then, when he realized he only had ten minutes left, he would make a mad rush to scarf down all of his food but would run out of time. This made me remember what I know about business, cognition and motivation.

In all of those areas of study, researchers have found that people are able to achieve more when tasks are broken down into manageable chunks. In a task list, do the quickest obligation first. Your brain starts to get confused after three inputs. People are more likely to stay engaged with a task when they believe they are making progress.

So, how does that translate into my son eating in 30 minutes? I began dividing his 30 minute time frame by how many items he needed to eat. If he had meat, vegetables and noodles, he got ten minutes for each. It became very clear that 30 minutes was an eternity to him; he got lost in how long it was and it no longer was manageable for him. Ten minutes kept him focused on eating one thing at a time. It didn’t hurt that he loves counting backwards from ten so he already knew what number was coming next and therefore how long he had left.

It was a huge success for us at meal times. We were able to finish more quickly, not wait around on him for an hour, and we had family play time after meals with the extra time.

I believe there is wisdom in giving kids tasks that they can accomplish. They feel proud, confident and successful. By breaking things down into smaller chunks, we not only are setting them up to succeed, but also reinforcing positive habits for adulthood.

How to Do It

The weekly chore list may seem daunting to a child. Help them to assign one task a day. Four subjects of homework might frustrate and intimidate a middle schooler. Ask them which subject will be the easiest to complete and start there. When something seems difficult, overwhelming or long, it is far easier to take it in small steps than tackle it all at once. And who doesn’t need a reminder of working smarter, not harder every once in a while?