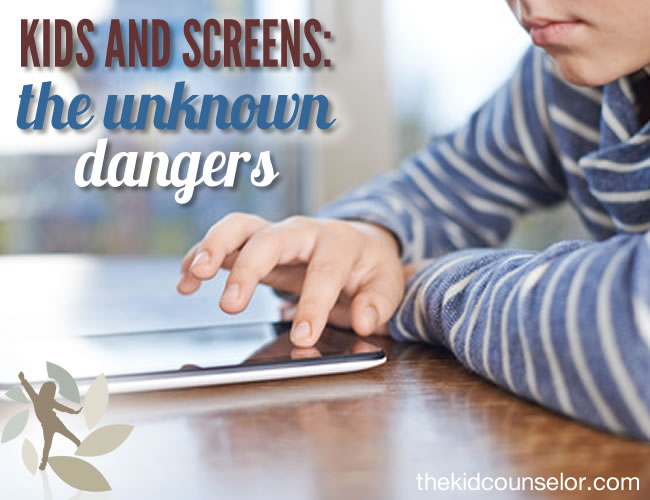 Kids and Screens: The Unknown Dangers

As kids are in front of screens more and more, researchers, parents, teachers, and therapists are beginning to acknowledge the consequences of that screen time. Data has emerged indicating that children’s brains are actually altered when they are exposed to screens. Not only is this impacting development and functioning, there are implications for behavior, emotions, and attitudes.

As a clinician working exclusively with children, I talk with parents weekly who share their concerns about their kids’ behaviors and the issues that are the most pressing in their families. For more than ten years, I have been listening to parents describe their kids; it has only been in the last year that I have seen the trends of moodiness, depression, anxiety, obsession, and paranoia. And the most appropriate connection to a cause that I can make is that more and more kids have greater and greater exposure to technology, screens, and electronics.

Although you must be aware of the concerns about excessive screen time for your kids, you may not fully understand the cognitive and physical effects. You probably have noticed the tantrums when devices are refused or taken away, but may not understand why. You likely have seen changes in behaviors during and after screen exposure, but can’t quite make sense of what causes it. The answer is that kids are dealing with identical issues that addicts do, because screens are addictive.

An article in the New York Post put it this way:
“Recent brain imaging research is showing that they affect the brain’s frontal cortex — which controls executive functioning, including impulse control — in exactly the same way that cocaine does. Technology is so hyper-arousing that it raises dopamine levels — the feel-good neurotransmitter most involved in the addiction dynamic — as much as sex.”

Doctors and researchers have been very vocal about the impact that screens are having on kids: they have been referred to as, “electronic cocaine,” “digital heroin,” and “digital pharmakeia” (Greek for drug). And if that isn’t enough, counselors and therapists have identified a dramatic increase in mental health diagnoses in kids without any other cause.

Kids are becoming aggressive, moody, withdrawn, temperamental, and crazy. But, it never used to be this way! As a result, the pervasive belief of those who work with kids and understand the severity of the screen addiction epidemic realize that reducing or eliminating screens is the only way to reverse these issues. The prescribed treatment method of “electronic fasting” allows the child’s nervous system to reset itself, and undo some of the damage that intense and consistent screen time causes.

An article on Psychology Today says this:
“If done correctly, this intervention can produce deeper sleep, a brighter and more even mood, better focus and organization, and an increase in physical activity. The ability to tolerate stress improves, so meltdowns diminish in both frequency and severity. The child begins to enjoy the things they used to, is more drawn to nature, and imaginary or creative play returns. In teens and young adults, an increase in self-directed behavior is observed—the exact opposite of apathy and hopelessness.”

Our recently-turned 7 year old son has never been allowed to have much screen time. He never watched one minute of TV until he was 2 1/2.  Even after that, he was limited to 30-60 minutes of any kind of electronics. Unless it was a rare circumstance, he didn’t even really ask to watch TV or play electronic games because it had never become a normal activity for him.

Over the summer, however, we moved. For the greater part of two months, we were packing, unpacking, furnishing a new house, staging the former house, and lots of other obligations and duties that didn’t allow for relaxed, family time. Further, in the new house, he didn’t have his regular games and toys in his new room yet, a basketball hoop outside, nor did he have the friends next door that he used to spend three hours with after school each day any more.

As a result, he spent a lot of time with an iPad playing games, in front of the TV watching cartoons, or playing XBOX. At first, this really wasn’t a problem. He enjoyed having screens and quickly acclimated to electronics. But over the course of several weeks, he started getting verbally aggressive, yelling at the game while he played. Then he started arguing and throwing fits when we asked him to turn the screen off. It even got to a point where the ONLY thing he asked to do was be in front of a screen – the moment he woke up in the morning, as soon as we returned home from somewhere, any second of down time, before he went to bed at night. He even began waking up earlier than normal because he was thinking about playing XBOX.

This monumental shift in behavior was observed in less than two months of exposure to screens! My hubby and I were absolutely floored at the changes. So, we acknowledged that the only option was to remove them from his daily life. We had a conversation with him about how screens are not good for his brain, and that we wanted to protect him from the dangers of wanting to have them all of the time. We locked up the remotes and controllers, hid the phone and iPad, and told him that he no longer had any screens during the week. (We did tell him that he can earn screen time on the weekend based on his behavior during the week, because we believe that a few hours a week is safe.)

While this was a difficult transition with a lot of tears, complaints, arguments, and frustration, he has returned to his normal, happy, calm self. (It did take about a month for him to stop asking to have screens during the week, though!) And I learned first hand the dangerously rapid descent into screen addiction first hand with my little boy. Now, when he comes home or wakes up, he grabs a book, goes outside to ride his bike, works on a seek and find puzzle, or plays foosball. And those are appropriate and healthy activities that don’t make me wonder if they are going to negatively impact his brain or his future.