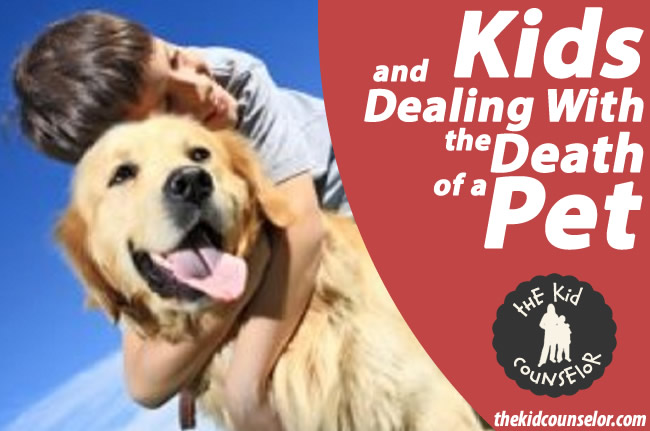 Kids and Dealing with the Death of a Pet

Pets are often just as much a part of the family unit as people. Children especially connect well with pets, as they seem more on their level than adults sometimes. Let’s face it, pets and kids have much in common: they love being on the floor, they love to jump and run and chase each other, they both struggle with verbal ability, they love to be outside, and so on. So, when a pet dies, a child can be faced with a difficult challenge to make sense of the loss.

I have written an article previously about helping children deal with a death, but in this article I want to focus specifically on pets. One of the reasons for this specificity is that I am currently facing this with our son. When I was sixteen, my mom brought home a puppy from a lady at work. She was a tiny black and white fur ball, who strangely resembled Gizmo from the Gremlins, but I digress. My mom named her Kelsey and she has been a part of our family for the past 15 years.

Over the last year or so, her health has been declining slowly. She lost her sight and hearing, and recently started having seizures. Needless to say, over the weekend, we lost a member of our family.

Even though my son does not see her often, he knows Kelsey and understands that she lives at Grandma and Grandpa’s house. So, when he mentioned Grandma this weekend, I said that she was sad because Kelsey died. Because he is two, I had to further explain that died meant she isn’t at their house anymore. I didn’t go beyond that, as he doesn’t have abstract reasoning skills yet.

However, I want to make a five points clear about effective ways to discuss the death of a pet with children, and what you might expect from them.

Do not make up stories about what happened to the pet, such as they are going to live on a farm or they ran away. Explain in clear, age-appropriate terms that the pet died, and is not going to live with you anymore.

2. Be ready to answer questions.

Kids make sense of their worlds by asking questions and processing answers. This may be the first encounter they have had with death. Open discussion and conversation makes it a part of life, rather than something to fear.

You and your children will likely all express grief differently. Do not expect a cookie cutter process. Talk about what you are feeling and encourage them to do the same.

You and your kids need closure to fully heal. Involve the kids in coming up with a tribute that fits the personality of the pet. Sing a song, draw pictures, fly a kite, whatever you all feel represents the life of the pet.

Kids do not express grief by crying. It is often behavior changes that emerge. Recognize it for what it is and be a little lenient.

Grief is difficult for anyone. Grief is confusing for kids. They often don’t fully understand the concept of death, so mourning the loss of someone or something is challenging. However, kids are very resilient and logical about things. One eight year old, when told that every one was sad about his grandma dying, said, “Well, I’ll just have to give lots of hugs today”. Another seven year old was acting out at home, and after processing the loss of her dog, communicated she really wanted the leash and a picture of the dog in her room. Finally, when my son learned that Kelsey wasn’t at Grandma and Grandpa’s anymore, and Grandma was sad, he said, “Lobo is still there (their other dog), and I will make Grandma feel better so she isn’t sad anymore”.

If given the chance, kids can very appropriately process grief. The key is being honest, giving them involvement, and allowing them to communicate about it in their manner.