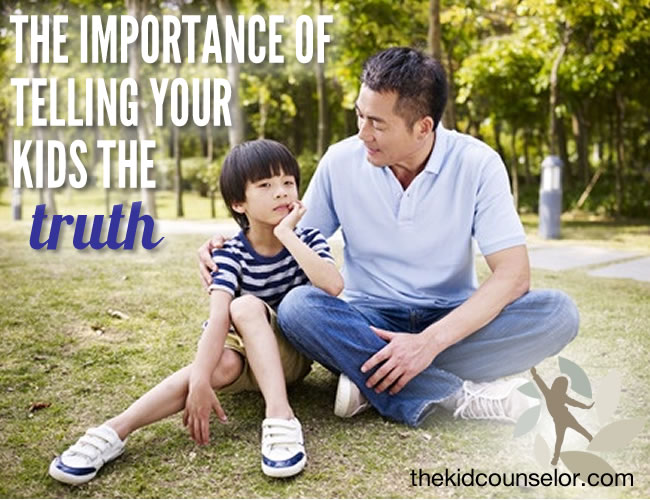 The Importance of Telling Your Kids the Truth

It is so interesting to observe the difference between adults and children when it comes to telling the truth. Adults are often quick to hide things, especially if they seem unfavorable or hurtful. Kids, on the other hand, are typically honest to a fault (and sometimes to the embarrassment of their parents!) and speak frankly about their feelings and opinions. What’s interesting, then, is the practice of shielding children from the truth. Not only is it a recipe for distrust, but also problematic on several levels.

My son’s baseball team was a very close-knit group last season and they frequently did things as a team off the fields. There was a bowling event scheduled for the team on a Saturday night, and as we finished practice Saturday morning, I said:

J looked at me and said: “It was cancelled.”

I was confused, so I went to the team mom who informed me that it was still planned for that night.

Me, back to J: “We are bowling tonight buddy, I just made sure.”

J said: “My mom said it was cancelled.”

Even though J’s mom had been standing there the entire time,  at this point she finally says, “Well, it isn’t really cancelled. I told you that it was… I’m not sure we can go. We’ll figure it out.”

She then proceeds to whisper to me that she had the boys that weekend (custody arrangement) and she had already made plans to go watch the UFC fight at a bar and didn’t want to take the boys to the bowling event. She had arranged a babysitter and instead of telling them the truth that they couldn’t go bowling because of a scheduling conflict, she lied to prevent them getting upset or arguing with her about the decision.

There are a few issues in play here, as I see it. First, children look to their parents as a model and example of appropriate behavior. And often what children learn is from what they observed, rather than what they were taught. A youth pastor of mine once said: “Kids will do in excess what you do in moderation and in moderation what you do in excess.” In this case, these two boys witnessed their mom lying, and will internalize that it is okay to do so when it suits them.

Second, kids are far more intelligent and aware than for which they are given credit. Plus, kids have a trust radar that extends for miles. When an adult in their lives willfully does not give them the truth, it breaks the respect and trust that was built in the relationship. Although kids are also quick to forgive, their memories remain of interactions with the people whom they love the most.

Finally, age-appropriate honesty is not only necessary but beneficial. By having an honest conversation with kids using words and concepts that they can understand, their world view expands outside of themselves. Kids live in the here and now, and are self-absorbed due to their emotional center. By being truthful even when the topic is difficult (such as death, divorce, therapy, cancer, etc.), kids witness emotional regulation, processing of feelings, discussion of difficult or conflicting messages, and more.

Kids should never be made to feel that they didn’t deserve the truth. Even with good intentions, parents who are not honest with their children about circumstances often learn in hindsight that their children resented being lied to or misled. When you tell your kids the truth, you make it very clear that you expect honesty from them as well – and that everyone deserves to know the truth even if it isn’t what they wanted to hear.