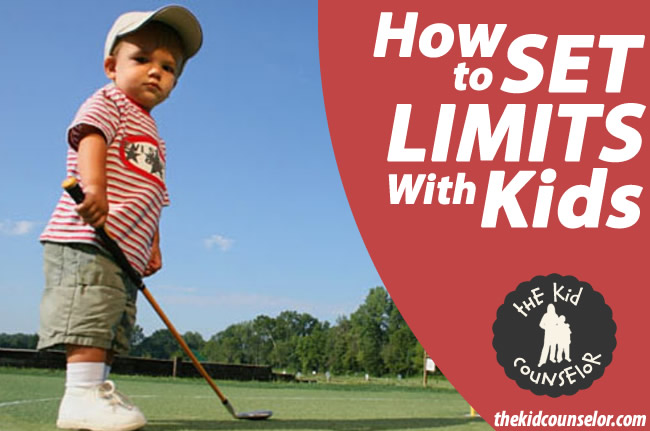 How To Set Limits with Kids: A Limit Setting Example from My Home

I try to be aware that although I raise my three year old based on Play Therapy principles, most kids are not used to the language and techniques that are commonly heard in my house. My son’s closest friends are our next door neighbors, who are newly 4 and almost 6. My son got kids golf clubs and putting green for Christmas, complete with rubber golf balls. All three kids came inside to play golf, and this is what happened in my living room.

There are three different types of clubs – a driver, an iron and a putter. My son always uses the iron when he plays by himself, and the 4 year old girl wanted to use it even though Kayne told her that he uses that one. She tried to take it from him, and I said, “I know you want to use that one, but that is the one Kayne uses. You can choose to pick one of the other two clubs to use.” (Notice the pattern there : Acknowledge the feeling, set the limit, offer an alternative). Read more about Limit Setting in these articles: Limit Setting with My Almost Two-Year Old, Limit Setting and Tips for Disciplining Children.

My son and the 6 year old boy both took their clubs and began to put the balls into the hole. The girl stood off to the side and pouted with her head down. She progressively sniffled louder and louder until she actually began to cry. When the crying became a little more serious, I said, “Tell me what is making you sad.” Notice that I didn’t say, “What is wrong?” because I already knew what is wrong, and if you know enough to ask a question, you know enough to make a statement. Notice that I also acknowledged her feeling in my response, telling her that I knew she was sad. Click the following link to read more about Reflecting Feelings.

The next important element to this story is that as soon as her crying became more severe, her older brother immediately tried to give her his club to pacify her. It is important to note that the 4 year old girl is the youngest of five kids and gets her way almost all of the time just by getting upset. She has never been expected to make her own decisions about her behavior or held accountable for her choices. I told her brother that he had chosen that club, and if she chose to play, she could choose to use the third club.

So, she refused to answer me and continued to cry more loudly. As this continued for several minutes, I consistently reminded her about the choice to play with the third club that was not being used. After I did this three times, I set an ultimate limit with her. I said, “If you choose to use the other club, you choose to play golf. If you choose to keep crying, you choose for me to take you home.” She refused to acknowledge this choice either. At this point, her brother began to tell her to stop crying. He also began to look at me with confusion, as if to say, “Why aren’t you giving in and letting her have the other club so she’ll stop?”

She continued to cry, so I gently picked her up and said, “Okay, you choose to go home.” At this point, she REALLY started crying. We made it outside my front door, before she said, “I don’t want to go home.” To which I replied, “Oh, you are choosing to talk now. If you choose to stay and play, you choose to use the third club.” She nodded her head, and we went back inside the house. After getting some juice, she walked up to the boys playing, grabbed the last club, and took her turn on the miniature golf course. All three of them played and had fun, without any issues about who had which club.

So, what were the lessons learned in this situation? First, the girl learned that she is capable of making choices, and she must accept the consequences of her decisions. Second, her brother learned that giving in to her sister is not the only way to solve the problem. Third, all three children learned that when a limit is set and choices are given, there is consistency and follow through.

My son actually relayed the scenario to my husband, complete with, “she was really crying” and “she was really sad.” When asked why she was sad, he replied, “She wanted the other club and chose not to play.” So, the lesson for him was that every child has options, and in our home at least, the same rules apply to any child. I also think he learned empathy, as he gave her a ball and the last club when she chose to play again.

The beauty of limit setting is that it gives you freedom from having to enforce punishments. Your child has the option to choose to break or obey the limit, and as long as you are consistent and enforce the limits, learns to accept the choices that he or she makes. Self-responsibility is what we want to develop in our children, and this is a very helpful way to do it.