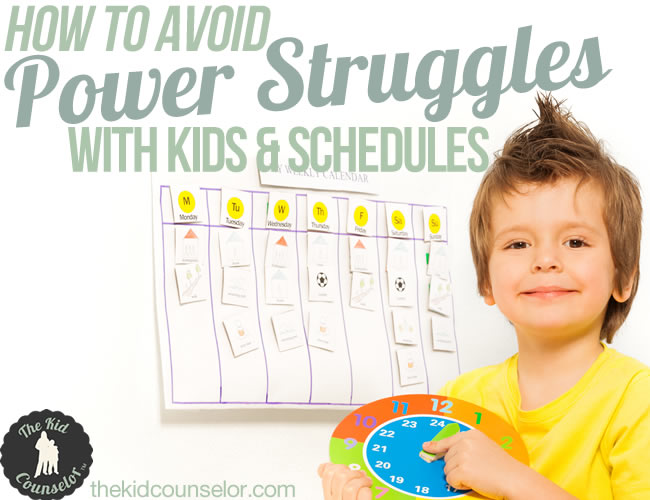 How to Avoid Power Struggles with Kids and Schedules

It is interesting to consider things from the eyes of a child. While adults enjoy the freedom to choose activities, schedules, and preferences, children are often expected to comply with requests whether they feel any power over the situation or not. I can imagine that we would not like living our lives at the mercy of another person’s decisions and time frames.

Expanding this thought process further, I also realize that we are constantly monitoring times and what needs to happen next. We check our watch or phone and think through how much time we have until the next obligation. Children do not! They engage in play or games or friends, and often get lost in the moment. That is one of the most precious elements of childhood – children are completely present!

So, imagine the difficulty and frustration of a child immersed in his or her world being abruptly told to stop and leave or change to something else entirely. It breaks the flow of the brain’s processing. It inhibits closure for the child. And therefore, it leads to resistance and power struggles.

The intent is to allow the child to wrap up his or her play and reach a point where the child is comfortable leaving without things feeling undone. Five minutes gives the child the chance to finish the story or the project or the conversation. I have used this with my son every time we transition anything or anywhere since he was old enough to play.

We are at the mall play area, and I tell him we have three more minutes left to play. When we need to leave home for the grocery store, I let him know he can finish one more race. When we need to go to the table to eat dinner, I tell him he can find one more puzzle piece first. These extensions of time before the next obligation only take seconds, but it allows for him to know the plan and feel completion of his activity.

This has eliminated almost all of the struggles for transitions for us. Early on in the process, there were times that my son did not comply even after the warning or extension was given. In those instances, I reminded him that I had already given him the warning and his time was up. If he continued to push, I gave him a limit setting choice. “If you choose to stop playing right now, you choose to play again next time. If you choose not to stop playing, you choose not to play next time we come.” This almost always worked, although there was one time that I carried him out of the play area without his shoes on all the way to the car because he did not stop playing.

In either scenario, he learned that he had the choice to comply when time was up. When we got to the car without shoes, he told me that he didn’t like it that I carried him all the way out of the mall. This was an opportunity to impart the lesson. I told him that if he would have chosen to stop playing and gotten his shoes on when time was up, I would not have needed to carry him. I reminded him that the next time we went to the mall, he would have the chance to obey and try again. Not surprising, the next time I said it was time to go, he immediately got his shoes on.

This is such an easy, Play Therapy based technique that requires almost no time but makes a big difference in transitions for our kids. When they are given the opportunity to wind down and prepare for something new, they do not have to fight for closure or get frustrated. And they learn to have self-control and self-responsibility, rather than having parents enforce behavior. Certainly a win-win!