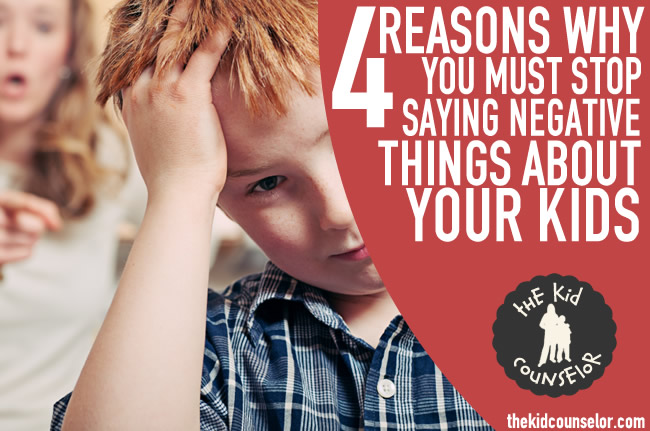 The power of the spoken word is incredible. That is why motivational speakers and self-help books encourage positive self-talk and speaking what you want into your life. With this understanding in mind, I try to be very purposeful in my language and my conversations with and around my son.

One of the most important things I have learned in my experience working with children and having one of my own is that they absorb much more than one might think. They hear, process, and internalize conversations around them, especially when the topic relates to them. They are often aware and listening even when adults think that they are unaware, playing or distracted. It is important to recognize the impact of statements made in front of kids.

In order to understand what negative statements are made often without parents’ awareness, I want to share some examples that I have heard recently. However, to focus on play therapy principles and why it would have been more appropriate in these situations, I will also include what could have been said instead.

We were recently at a playground and several of the kids were meeting each other for the first time. After being prompted, a few of the kids said hi to each other. One two year old girl did not want to say hello, even after her mom tried to push the issue. She shook her head for the last time, and her mom said, “No, you are going to be the rude one and not say hello to anyone.”

Self-responsibility is developed by being given the opportunity to make choices and accept consequences for actions. If the girl did not want to say hello (out of fear, shyness, discomfort), the play therapy response would have been to reflect her feeling and acknowledge her choice. “You are choosing not to say hello” or “You do not want to say hi right now.”

My husband and I know a couple who has three kids, and they struggle with their middle child’s behavior. When the mom talks about their middle son, she continually refers to him as their “devil child”, “devil’s spawn”, or “satan”. While in some circumstances, these comments gather laughter from parents who relate, when these comments are made in front of the child, he snickers.

Behavior is largely cultivated based on self-awareness. The Self-Fulfilling Prophecy has been proven again and again, where what a child is told about himself, he becomes and believes. If this child tests limits and pushes buttons, he needs to hear his strengths and positive traits more than negative ones. The more he absorbs appropriate behavior recognition and realizes that he has good qualities, the more he will act like that in the future. Play therapy is rooted in the idea that you focus on the child, not the problem.

We were at a park a few weeks ago and a mom was pushing a younger child in a swing while her older daughter was playing a few yards away. The older child came up to her mom whimpering about hurting her leg. Her mom responded, “Geez, it is always something with you. You get hurt everywhere we go.”

Pointing out flaws in a child, in this case clumsiness, not only makes a child feel bad about herself, but also discourages development of self-esteem and confidence. Responding in a neutral manner allows the child to feel heard, while allowing her to process what happened on her own, without judgment. “You hurt your leg, wow!” or “Oh my, you got hurt again.” would have been appropriate.

We were at the play area at the mall, and a dad was watching his son like a hawk while his son played with other children. The boy seemed to be somewhat aggressive with other kids, and soon a mom came in and set a baby in a carseat on the floor next to her. Soon after, the boy went over a tried to hit the baby. The dad told him no and to be nice. He tried to hit the baby again, and the dad smacked his hand (quite counterproductive, but that is for another article). When he tried to hit the baby a third time, the dad picked him up and said, “You are such a brat.”

Limits are only needed when they are necessary and this is one of those instances. When the child needed to have behavior redirected, play therapy principles would include, “Babies are not for hitting. You can choose to go play.” By setting the expectation that babies require gentle touches, and by giving him an alternative, it teaches self-responsibility and allows the child to make the decision to obey or break the limit. Telling him he acts in the way that you do not want (bratty), he is encouraged to continue that behavior rather than make other choices.

Words spoken in front of kids, especially about them, make lasting impressions. If you talk about being worried about finances, they learn to worry. If they hear you argue, they learn negative conflict. If they hear you say they are mean, lazy, rude, or a troublemaker (either directly or to someone else), they begin to assume they need to act that way because the expectation has been set.

By using play therapy principles, you can promote positive beliefs, behaviors, and responses in your kids. When kids hear that they are helpful, kind, smart and loving, they tend to inhabit those characteristics. Once again, play therapy focuses on the child and the relationship, not the problem. What does your child need to hear from you today?