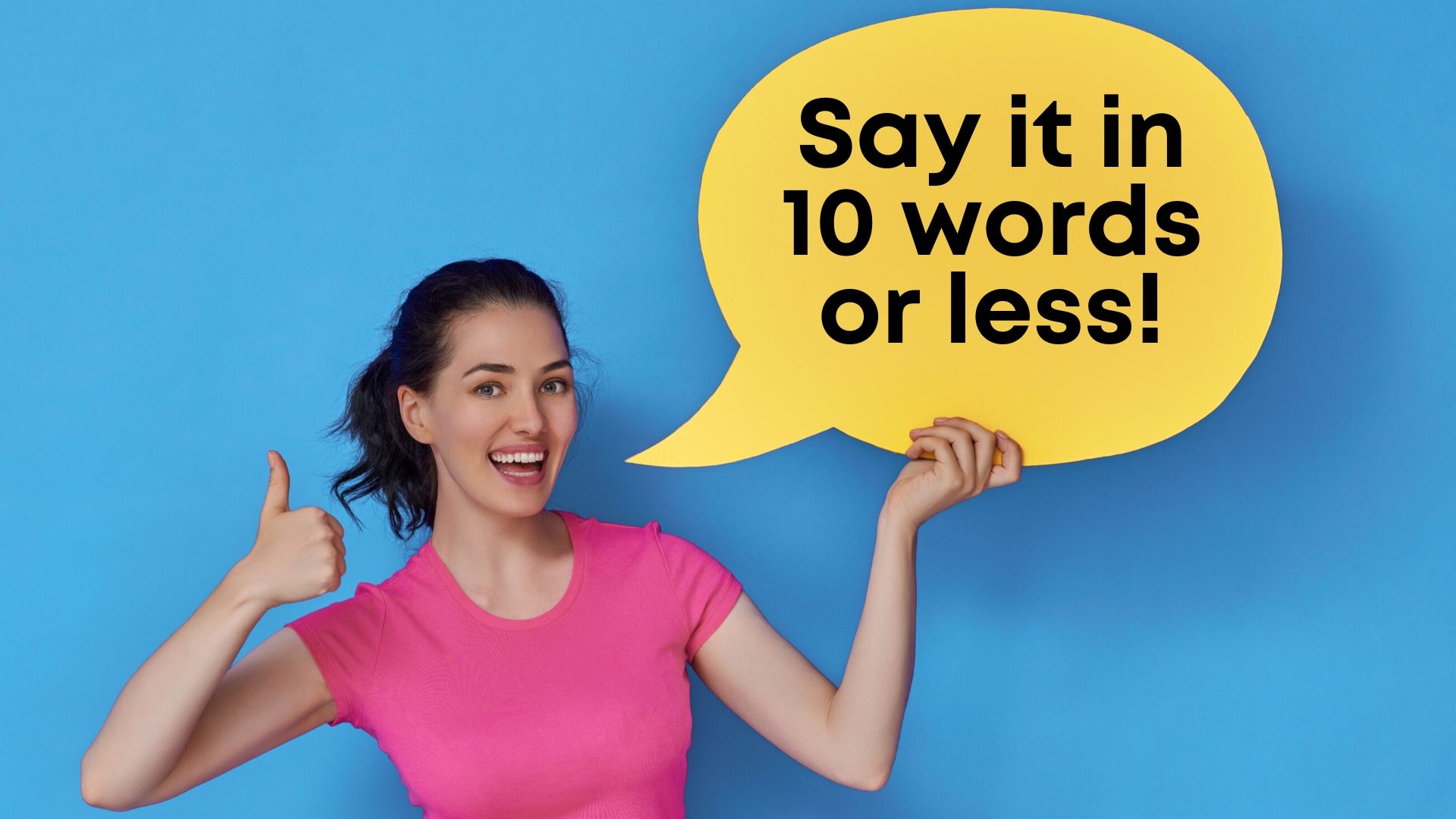 I understand that you want to like being a Mom again! If you resonate with this message, and you say to yourself “I speak too much”, “I say too much”,  “I over explain”, “I over think”, “I over talk”, and you don’t get the results that you want, then Child Parent Relationship Therapy might be exactly what you’ve been looking for!

I’m wondering if you find that you talk to your kids and feel like it goes over their heads, or that no matter what you say, it seems as though they’re not listening.

I think that is one of the greatest struggles we have as parents. As sometimes we feel that what we say falls on deaf ears or we waste our breath and we don’t even know if they are ever paying an ounce of attention to us.

If that is you, I have some encouragement for you today. In my private parent coaching that I offer, which is called Child Parent Relationship Therapy (CPRT), it’s a 10 week course.

One of the rules of thumb that we talk through is “if you can’t say it in 10 words or less, don’t say it”, and I want to give you a second to let that sink in, because consider how many times you say far more than 10 words, and now you might be going Oh, no, I might have to rethink every interaction I have with my kids from now on.

If you can’t say in 10 words or less, don’t say it is rooted in the belief that kids are emotional. Kids are here and now, they live in their hearts, which is where their feelings are.

So every moment of their life is governed by their emotions and their feelings. And whatever is happening in that specific there and now moment. We tend to want to bring them up to our level of cognitive processing where we are rational, we are logical. We are intellectual, we are cognitive beings.

So we think through things, and we want to explain that to them. We want to impart a lesson to them where we want to share a moral or we want to help them understand the rule better. And we think that the best way to do that is to talk. Which four adults? Absolutely. Yes, we are verbal creatures, but our kids are not. They are nonverbal, which means they’re emotional.

So let me share a couple of examples. Often what will happen is a child is doing something on their own. They’re playing, they’re out, kind of taking care of themselves and all of a sudden they come and they’re upset about something.

Either they got hurt, They’re frustrated. Something didn’t go their way. And they come venting… again, they’re emotional and they arr here and now. So this what I feel right now is big and I need to tell somebody about it.

So they come to you and they say, I was outside playing and David said that he would not play on the playground with me, And now I have nobody to play with.

They are feeling frustrated. They’re disappointed. They’re annoyed they are angry. Maybe they’re sad. They feel lonely. There’s so much there to unpack emotionally.

And as parents and as adults, we will often jump to. “Well, you know what? Sometimes if another child doesn’t want to play what you want to play, you can go find another friend, and sometimes you have to share and you take terms. So maybe you play what he wants to play for a while. And then you could go and see if he wants to play in the playground .”

Well… and it would keep going. But that already way exceeded the 10 words or less rule of thumb.

So what we often do is We jump to trying to explain things to our kids instead of meeting them where they are in their emotion.

Emotionally, they were feeling all of those things that I shared with you and in our over explanation, the moment to connect with where they were, with their feelings, was completely missed and lost.

Another example might be a child gets hurt. This is where I see this a lot. So the child knows that jumping off of their bed onto the pillows on the floor is something you’ve asked them not to do because you don’t think that it’s safe.

Well lo and behold, the child jumps from the bed to the pillow. The pillow slides out, they bang their head and they come with a red mark and say, crying, saying, “I hurt my head because I jumped off my bed.”

So there’s so much going on there emotionally and we jumped to “Why did you do that? You know that you’re not supposed to jump off of the bed. When you jump off the bed, you get hurt. That’s why I’ve told you 100 times not to do that and see, now you’re hurt and now you have a bump on your head.”

We end up feeling like, Why do I even say anything? They don’t listen to me. Why do I bother? They zone out and they’re looking at the bird in the sky. They’re not even paying an ounce of attention to what I’m saying.

And we end up feeling like they don’t care. They don’t appreciate what we say. They don’t value our thoughts. And it’s just a misunderstanding of how to communicate with kids.

Because when the child comes in and says, “David won’t play with me even though I want to play on the playground”. If we were to say “you’re disappointed that he doesn’t want to play on the playground”. Less than 10 words. Child feels heard. We don’t feel ignored. The child feels validated. And, yes, that is exactly how I feel. Both parties walk away in a really positive interaction.

So if you can’t say in 10 words or less, don’t say it is such an incredibly helpful tool to have in our parenting tool kit so that we can meet our kids where they are and that they can meet us.

Because expecting them to come up into our cognitive headspace is setting all of us up for failure. But meeting them in their emotional center is where success is always found.

So we have to redirect the way that we approach them, not the other way around. And that’s often saying less and being very purposeful with what we say in those moments.

So if you are that mom or dad or caregiver that says I over talk. I over explained. I over rationalize. Maybe you’re the mom that tries to reason with your kids or tries to negotiate with your kids. Also, always way more than 10 words and also a very frustrating prospect because they are not rational and they won’t negotiate. They can’t reason.

They don’t develop abstract reasoning until about 13. So to expect them to be able to reason through something, it’s futile. And it’s frustrating.

So if this resonates with you, if you realize you know what I speak too much, I say too much. I over explain. I over think I over talk.

You may feel that this is exactly the kind of training that you need.

It sets you up to know exactly how to interact with your kids in the most healthy and effective way.

You might end up feeling frazzled at the end of the day because you talk all day long and you feel like it falls on deaf ears.

You may feel that things are very chaotic because you’re just moving from crisis to crisis, to crisis, and all you’re trying to do all day long is to help your kids get it, and they just don’t get it.

You might feel overwhelmed. You might feel exhausted. You may feel like I don’t have the tools to do this effectively, and we’re just not clicking.

Child Parent Relationship Training, the private parent coaching, it gives you the tools that you need.

When you’re with your kids, you want to be calm and happy so that you can love being a mom again.

So this training gives you the skills and the tools to help you feel that you are in control, that you are calm, that you have the skills that you need. That you can handle these things when they come up with the effective tools to manage the emotions that your kids express and meeting them where they are.

So if you would like more information, there is no obligation. You’re not committing to the training, but you can request us to send you a PDF. It will give you all kinds of information about the private parent coaching program, and then you’ll be able to further determine if you feel that it’s a good fit.

But if this resonates with you, if you feel that maybe you say too much and you don’t always know the best things to say, this might be a great fit for you.

So I look forward to hearing from you, I will be happy to send you information. Again, it’s no obligation, but this is a training that equips you to feel that you are able to love being a mom again.

And sometimes that means saying less and meeting our kids where they are. And that’s what this will give you.

Thanks so much for being a part of The Kid Counselor and Play Therapy Parenting.

Talk to you again soon, bye.