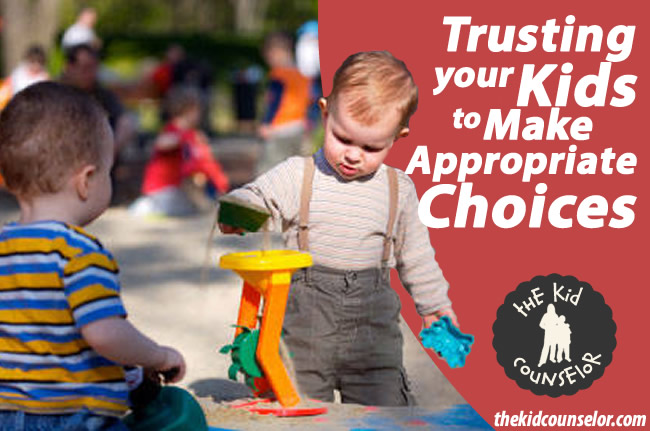 I had an experience this week that reminded me of a helpful tip to remember when interacting with kids. It is easy to feel compelled to direct children’s behavior before it is necessary or prompt their actions in an attempt to be proactive, but it is actually more helpful to practice trusting your kids to make appropriate choices by encouraging positive behaviors beforehand. Let me give you an example.

I was sitting on a bench in a play area at our mall. A dozen or so kids were playing, ranging in age from 1-8. There is a large dome with holes that allows kids to climb on top or crawl inside. My son was dropping into a hole on the top and coming out on the side, very proud of himself that he could squeeze into the “tough hole,” as he called it. An infant then crawled in to the dome and sat inside while the other kids continued to play.

My three year old son looked at the baby and went out a different hole so he didn’t have to crawl over him. He said, “A baby is inside.” I said, “You saw him in there. He is little!” Kayne agreed and went back to crawling through the hole. A girl, about five or so, then crawled inside and was surprised to see a baby. She stuck her head out and said, “Mom, there is a little baby in here.” Her mom said, “There is a baby? Be nice to the baby. Don’t hurt the baby.”

Neither my nor the other mother’s response was particularly noteworthy, other than the implication behind the statements. Her comments, while likely in an attempt to protect the baby or remind her daughter of expectations, assume that the girl had intentions of being rough or careless around the infant. In my response, I never thought to tell him what not to do because I trust that he knows how to act around babies.

One of the rules for setting limits is that you only set them when they are necessary. In other words, if the girl demonstrated aggressive or inappropriate behavior toward the baby, that is when you would set the limit. “Jessie, I know you want to play, but the baby is not for playing rough around. You can choose to play somewhere else right now.” However, by telling her what not to do before she even had thoughts of doing so, her mom communicated a lack of trust in her daughter. This distrust breaks the relationship in that moment, even if it is subtle.

Imagine how deflated the girl might have felt. She merely wanted to share her surprise of finding the baby in the dome with her mom, and the response she received likely made her question why she was being chastised for something she hadn’t even considered. I can imagine her thinking, “I wasn’t going to hurt the baby, I just saw him and wanted to tell you.” This might be an exaggeration of what a five year old could cognitively process, but the feelings of confusion, hurt or frustration would still exist. With older kids in a similar situation, there would likely be anger, resentment and rebellion in response.

So, how was my response play therapy based and why was it effective? I acknowledged his comment by reflecting content (“You saw him in there”), or paraphrasing back to him what he said. The idea is that you communicate through your response that you hear and understand your child, and that what they say is important to you. It basically serves as a summary of the sentence. Then I added an observation of my own (“He is little”) to serve as a point of connection for him.

It is important to acknowledge that the reason that my response worked is because I have reinforced and encouraged appropriate behavior around infants at other times. Each and every time we see a baby, I have neutrally discussed being calm, asking permission to touch them, speaking softly, touching gently, etc. Kids learn best by example and by experience in teachable moments that seem insignificant. The sum of all of those experiences where I demonstrated appropriate behaviors around babies and shared those with him (and why!) have created a three year old that understands how to act around them.

By investing time in teaching kids expectations in neutral settings (when no one is mad, upset or currently breaking rules), you can have confidence and trust in how your kids will respond in future situations. Further, by setting limits only when necessary, you communicate that you believe your child knows how to behave and you give them the freedom to choose appropriately. This increases self-responsibility, self-esteem and builds confidence in their decision making skills.